In February 2021, RSBI made 51.6. The level of business activity for the first time in the last year entered the growth zone, reaching the pre-crisis figures.

In the sales component, we see the forecast growth. 31% of the companies assume their revenues growth in the forthcoming three months (vs. 19% in January) – it is the best figure starting from the moment of lockdown mitigation in June 2020. At the same time the share of the companies that expect revenues decrease in the nearest future is dropping significantly - 24% vs. 35% in January.

As for the fact, only 11% of executives mention growth of their financial indicators, which is by 6% lower vs. January 2021. The revenues decrease is typical for 53% of SMB companies, which is in general comparable with the results of 2020-year end.

SMB outstanding optimism provided growth of the sales component; however, it is still in the zone of manifested decrease, which indicates the weakness of products and services distribution.

The HR component for the first time since the beginning of 2020 entered the growth zone: the figures are getting closer to the pre-crisis level. The component’s growth is also explained by the optimistic expectations of SMB companies.

The fact has not changed since January. 10% of SMB companies mentioned their FTE growth; 17% - FTE reduction.

At the same time the growth of the forecast is also mentioned: 19% of the companies are planning to increase their FTE numbers in the nearest future (16% in January), 8% - to reduce (8% in January). 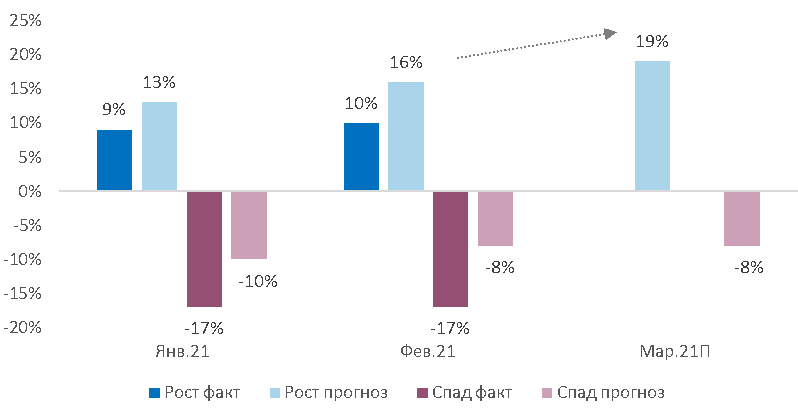 The investment component still demonstrates a stable growth and in February 2021 it is very close to the record high figure of the end of 2017 (57.6 points).

The stable growth of the investment component has been higher than the neutral zone for several months and the high figures in the beginning of 2021 prove that the investments are getting to the pre-crisis level.

The loans component reached the level of the first 5 months of 2020 and renewed its historical maximum for the first time.

The trend of the stable demand growth and the high level of readiness to invest into business provides the growth of satisfied demand: from 28% in January up to the record 32% in February. 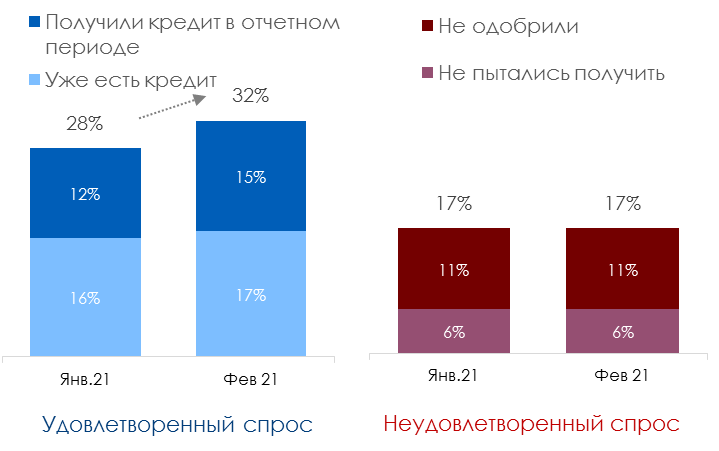 RSBI — starting with 2020 a monthly research of SMB business attitudes is organized by PSB jointly with OPORA Russia and MAGRAM Market Research. The research covered owners and executives of 1,789 SMB companies across all regions of the Russian Federation. Index higher than 50.0 p.p. indicates the growth of business activity, lower than 50.0 p.p. – the decrease. If the index is at the level of 50.0 p.p. – the market is neutral.

Kommersant Small Business Is Warming up with Income Hope