RSBI: in April Business Activity in SMB Segment Demonstrated a Stable Growth for the Third Month in a Row 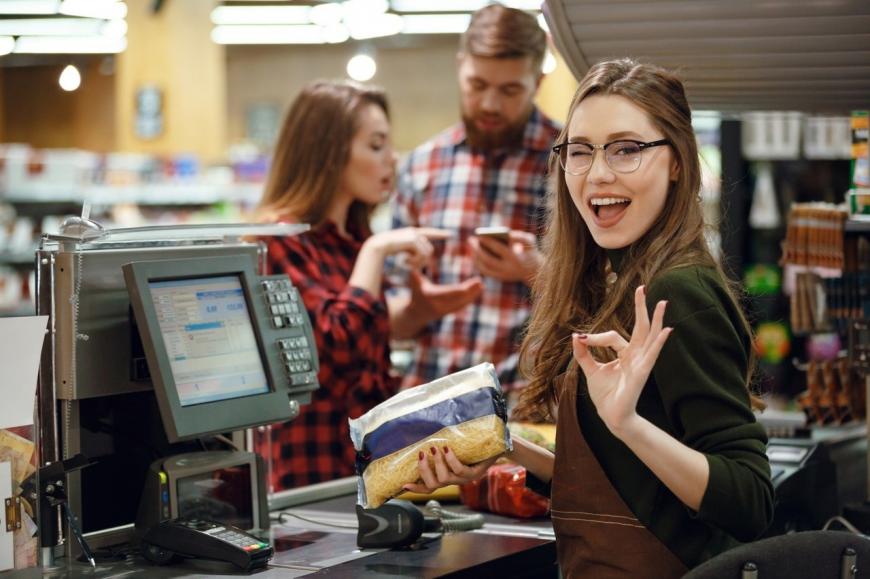 In April 2021 RSBI made 52.6. The level of business activity in SMB segment kept its growth dynamics for the third month in a row.

Key trends
In the sales component, we see the growth of both the fact and forecast for the second month in a row. The share of customers, who mentioned their growth of actual financial figures, raised by 5 points from 12% in March to 17% in April. We also see a gradual share decrease of those companies that demonstrate their revenues drop – from 46% in March to 44% in April.

At the same time, the share of companies that are optimistic in their sales forecasts keeps growing – from 33% in March to 35% in April. At that the share of pessimistic businessmen in terms of sales growth is the same and still makes 21% 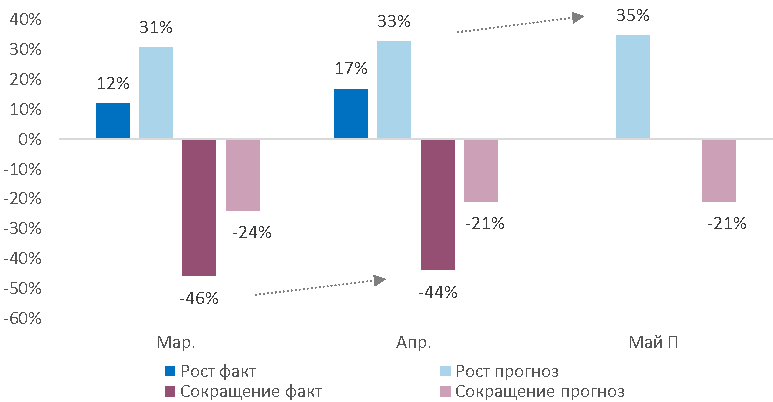 The HR component demonstrates a small decrease from 53.5 to 52.5 points. The decrease was caused by the redundancy growth in the last month (from 13% in March to 18% in April). At the same time the share of those, who mentioned the FTE growth, kept almost the same – 12% in April vs. 11% in March.

The forecast on FTE growth and reduction is the same. In the nearest future 22% of companies plan to increase their FTE numbers, while the planned redundancy was mentioned by 6% (5% in March).

In April the investment component is still in the growth zone, in spite of its April decrease: from 57.6 to 55.9 points.

The number of executives, who plan to increase their investments into business, decreased again from 29% in March to 26% in April, the business reduction was mentioned by 5% of SMB companies vs. 6% in March.

The loans component has demonstrated growth again for the last month and is getting closer to its historical maximum – 56.3 points.

The growth of this component is caused by the higher satisfied demand, i.e. the increased number of companies that have already got loans (from 15% in March to 16% in April) and that have their loans approved (from 11% to 12%). 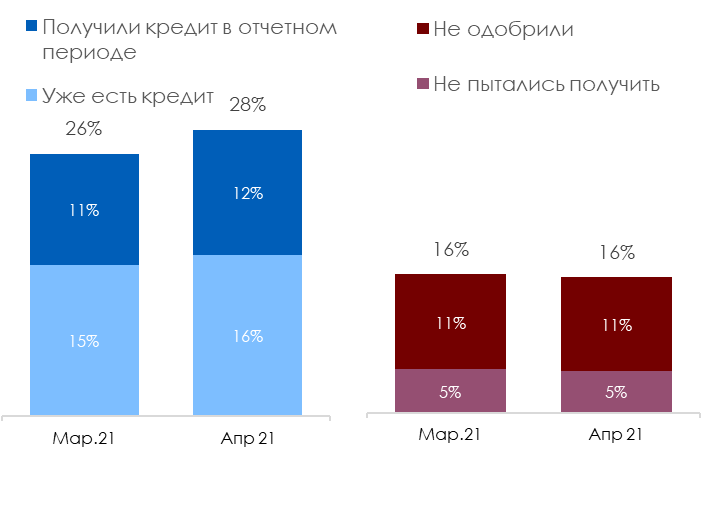 RSBI — starting with 2020 a monthly research of SMB business attitudes is organized by PSB jointly with OPORA Russia and MAGRAM Market Research. The research covered owners and executives of 1,802 SMB companies across all regions of the Russian Federation. Index higher than 50.0 p.p. indicates the growth of business activity, lower than 50.0 p.p. – the decrease. If the index is at the level of 50.0 p.p. – the market is neutral.